“Bacharach is the most antiquated specimen of human habitations I ever beheld. Compared with Bacharach, Oberwesel, St. Goar, and Andernach resemble the most modern street in Paris.” – that is how Victor Hugo described the city in his book “The Rhine” from  19th century. Today visitors are still overwhelmed with its charm and it is old-fashioned style became it is biggest asset.

Bacharach (Germany) lies at the 543th kilometre of the Rhine river, close to other tourist destinations such as Oberwesel or Sankt Goar. It has just around 2000 inhabitants.

Bacharach got more popular in the middle ages for trading wine and wood. The traditional song  from the region says:

“At Klingenberg on the Main,

At Wiirzburg by the Stein,

At Bacharach on the Rhine,

There grows the best of wine ” 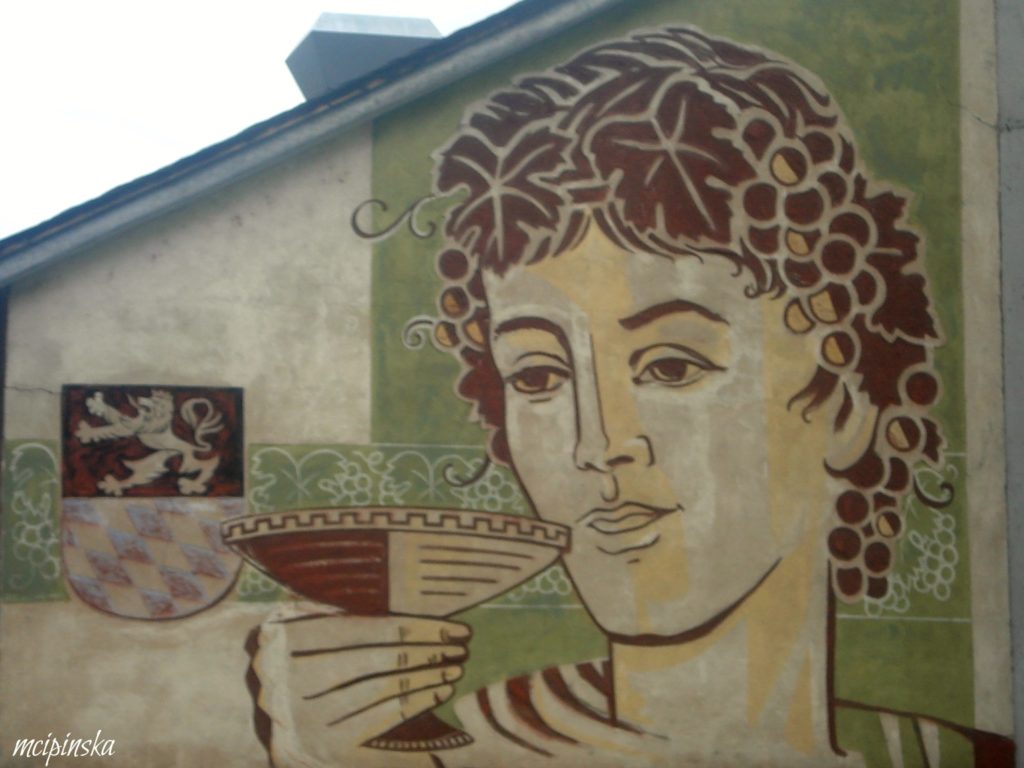 Today tasting the regional wine and local food are still one the most recommended experiences.

And there is so much more! Wandering around the city we can enjoy beautiful timber framed houses, decorated with flowers. Flowers are everywhere. No doubts why it is often called the most beautiful village on the Rhine. It is full of colours, antiques and history. 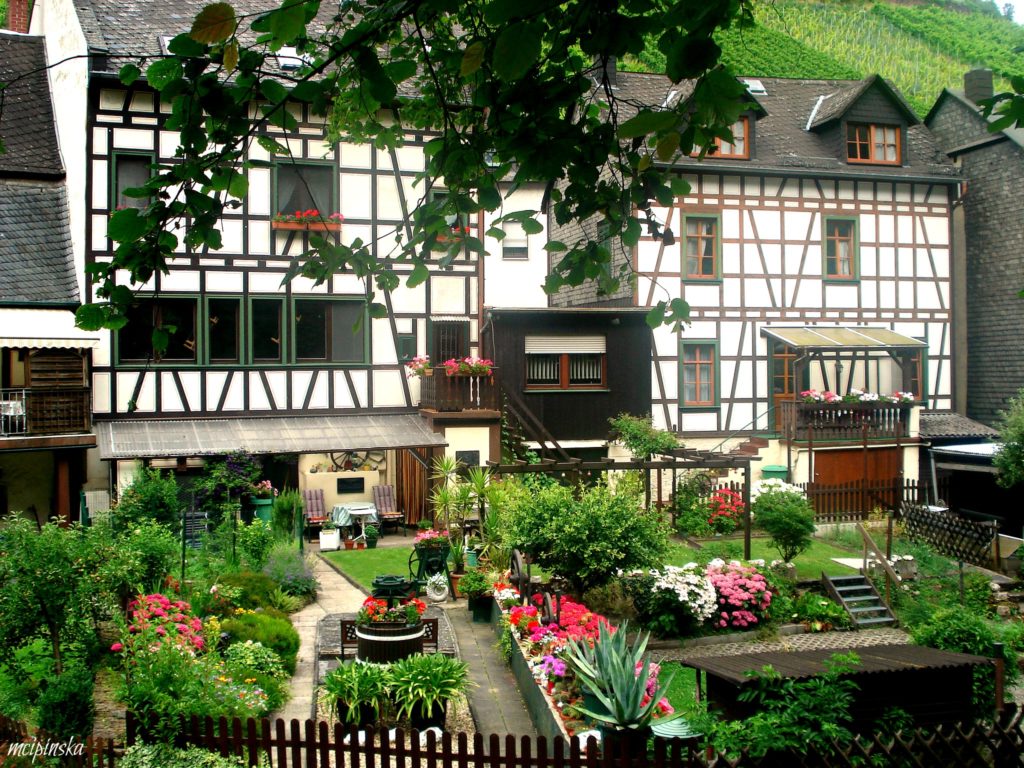 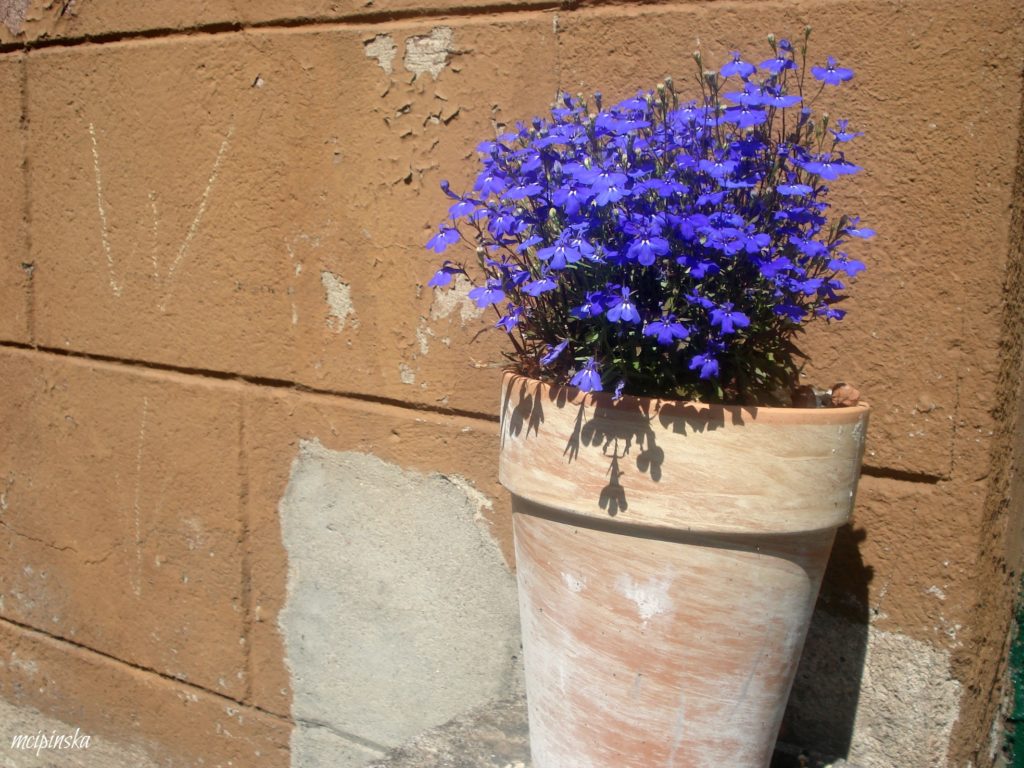 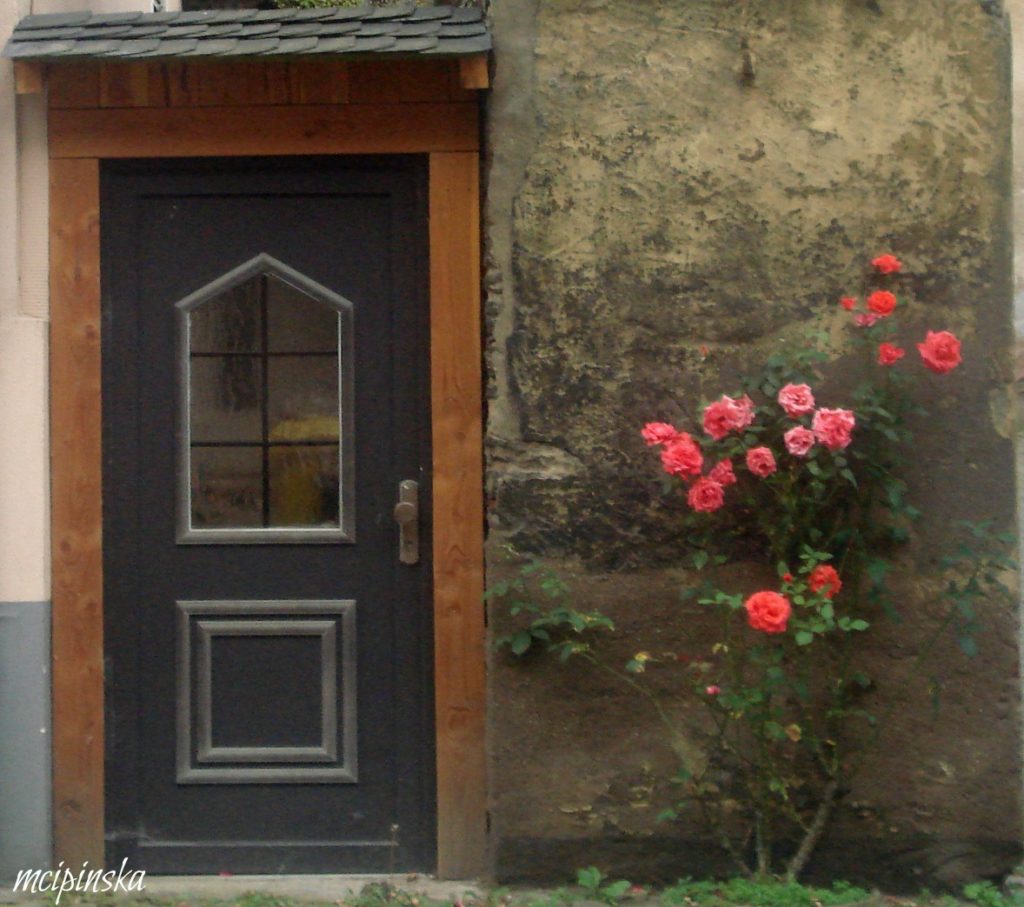 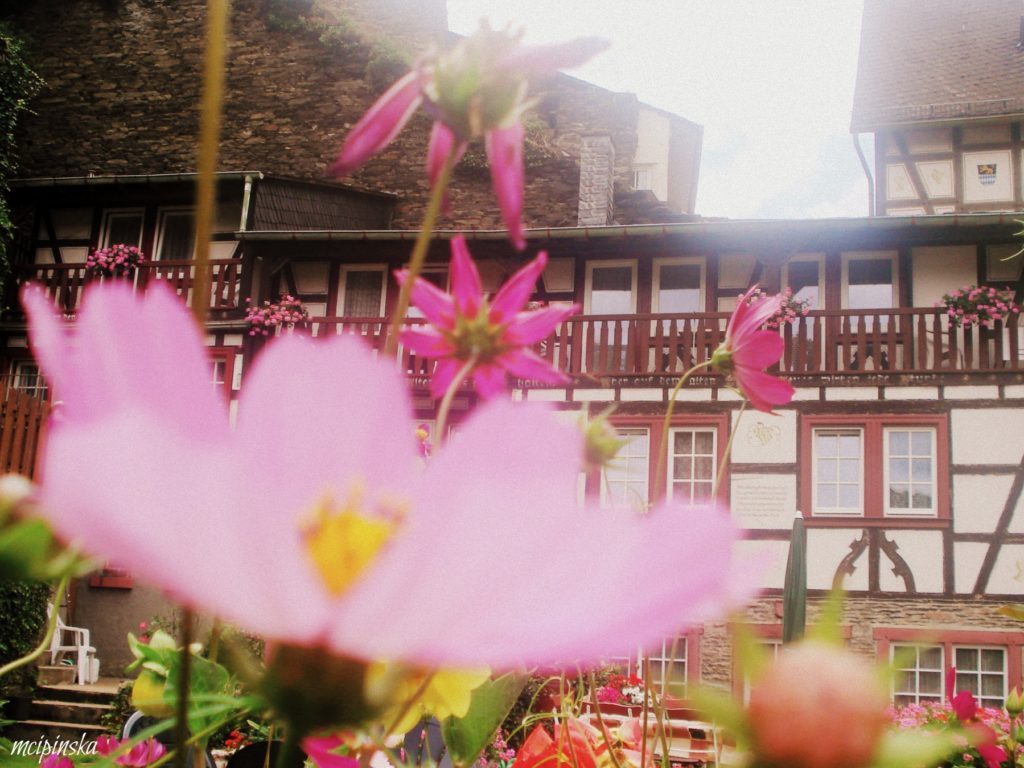 It is a perfect destination for one day  trip. In the centre of this picturesque place there are: the Altes Haus, the market square and St. Peter’s Church.

Then, there are two alternative ways of sightseeing, which kind of overlap, but everyone can adjust them to own needs. One is along the old city walls which surround whole Bacharach. 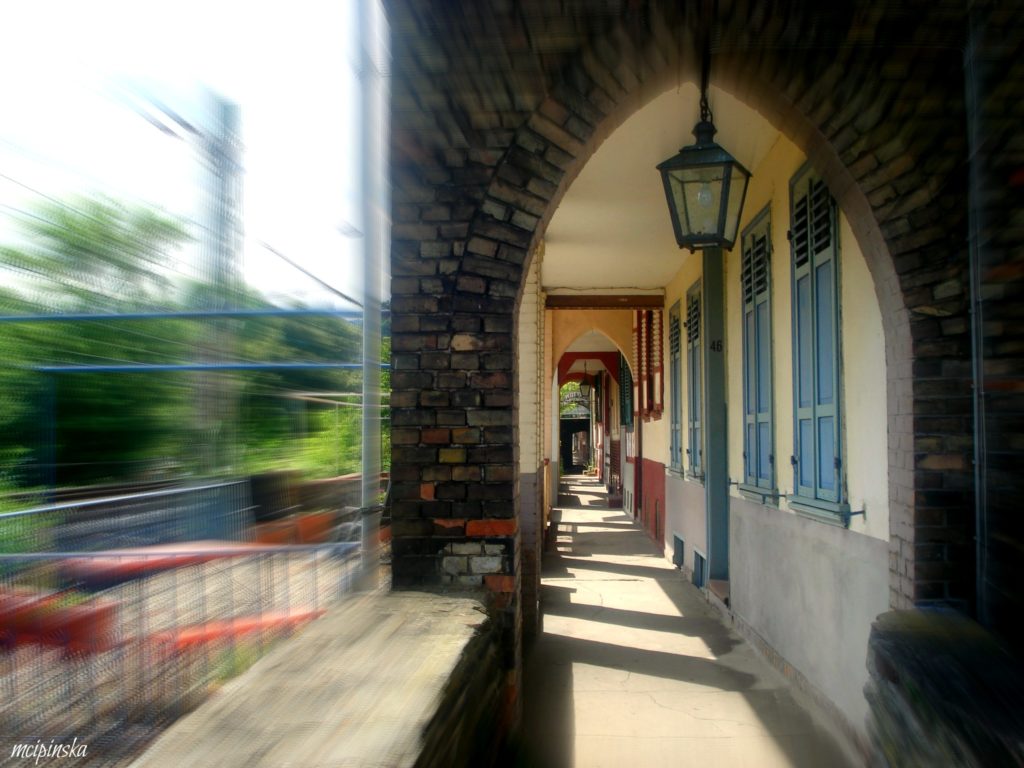 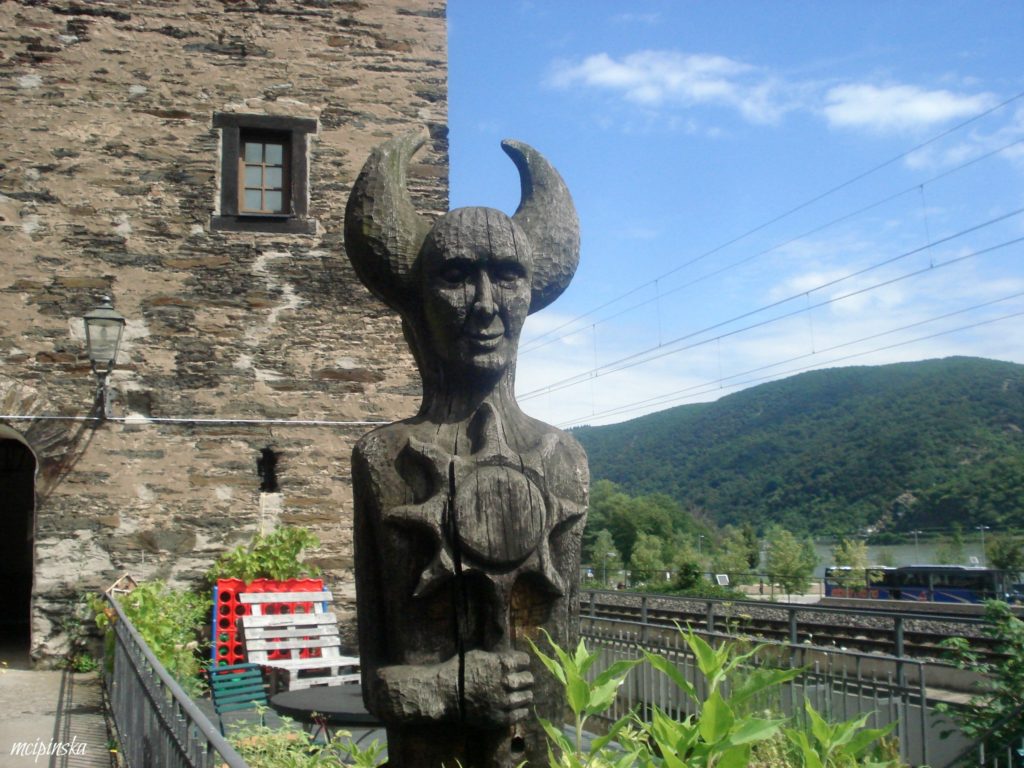 On that way there are multiple towers and one of the main attractions: Stahleck Castle. If anyone ever dreamt of spending the night (or day) in the castle, but couldn’t really afford it, that’s the place to go. Nowadays, the Stahleck Castle has a youth hostel within with very reasonable prices. It has a big  terrace with wonderful view on the Rhine. 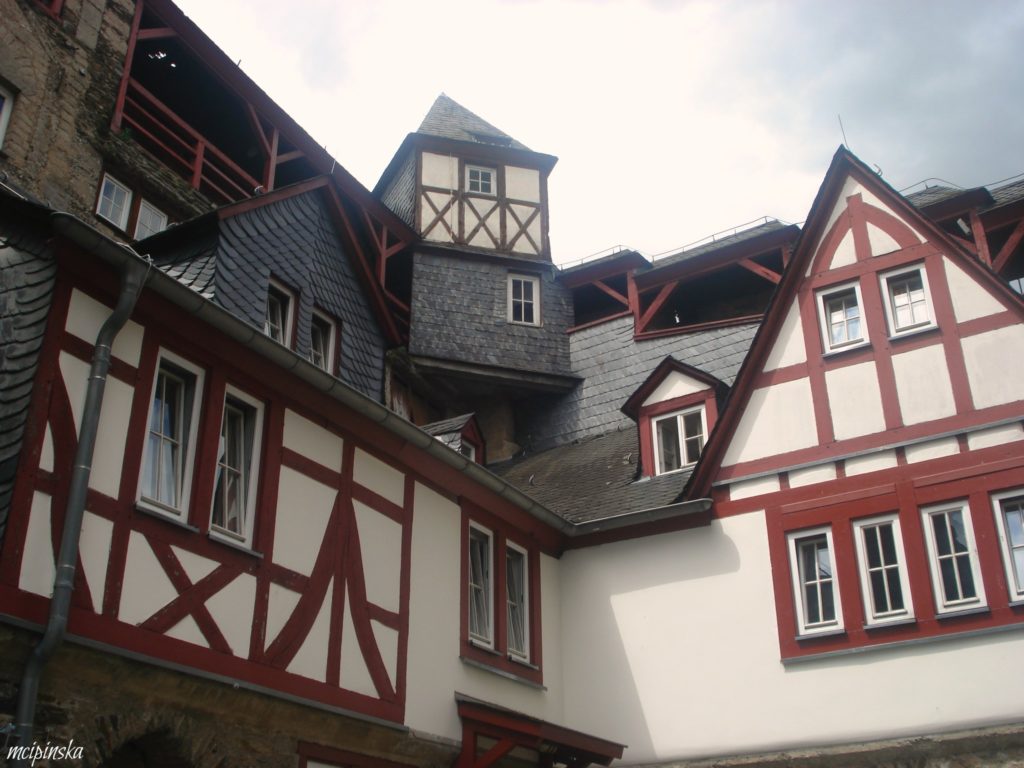 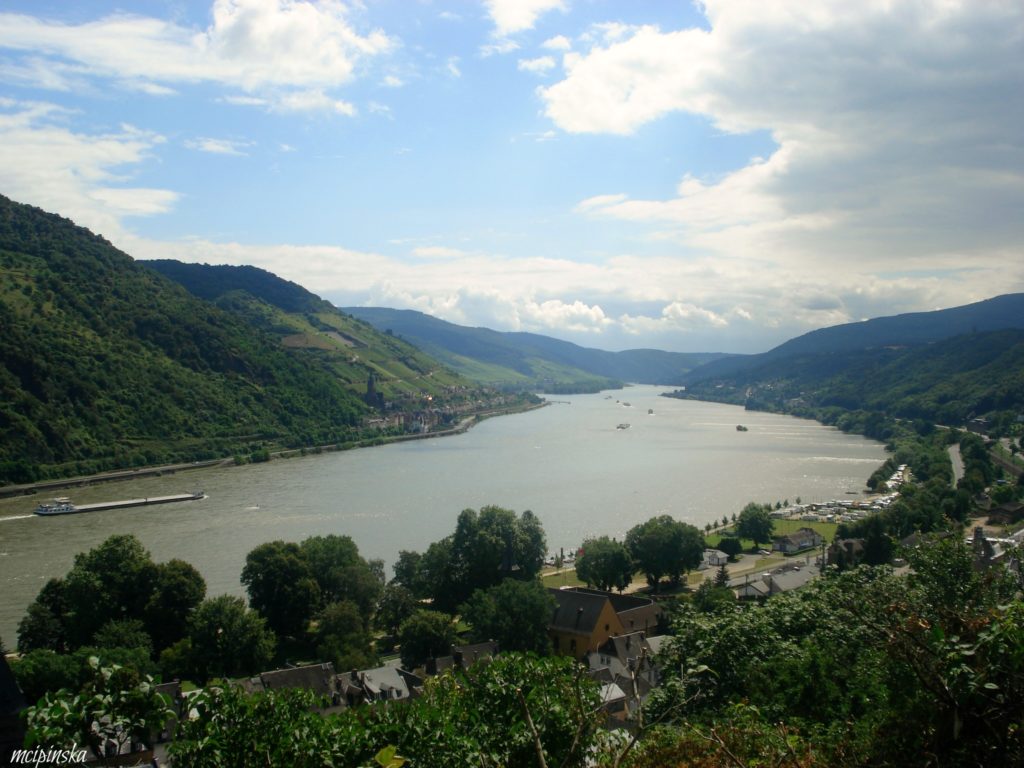 Second alternative is reaching the Castle through The Chapel of St. Werner built during Rhenish Gothic period – now it is a ruin, but still beautiful. 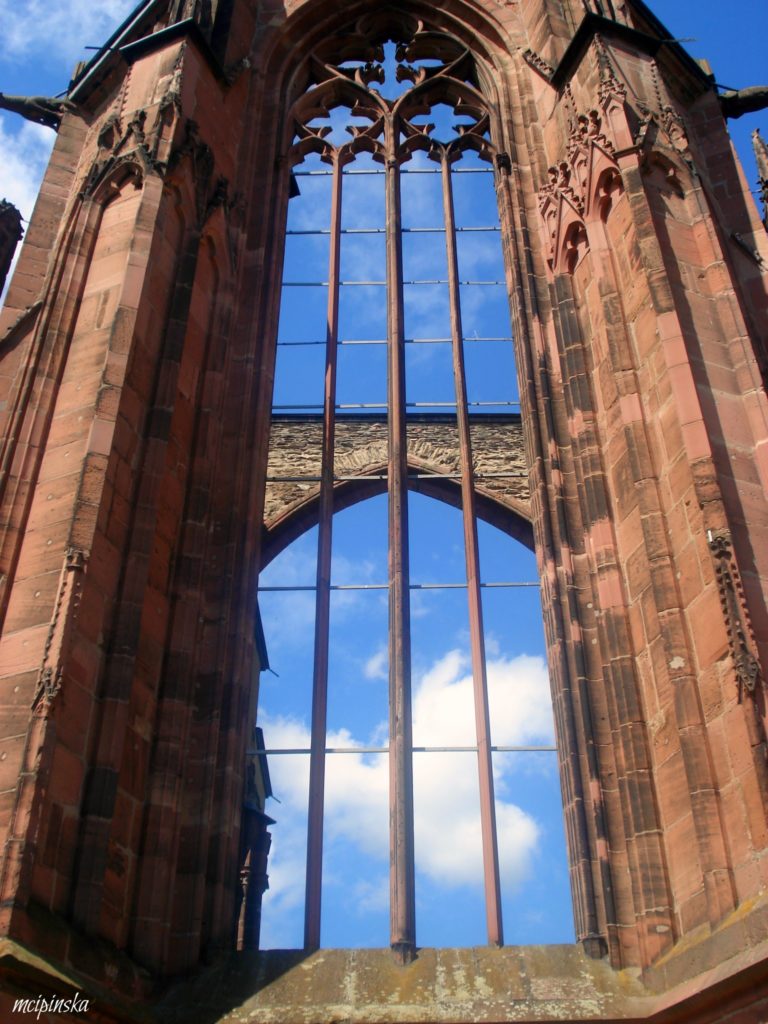 “without either roof, doors, or windows; but a magnificent specimen, when seen with its profile well-defined upon the sky”– V. Hugo

For more adventurous tourists, on the way between the Castle and Post Tower there is a very steep path in the forest supported with chains to climb. Not recommended after the heavy rain.

For the best view of the area it is good to go to the Post Tower and climb the stairs inside. It is also where the vineyards are. 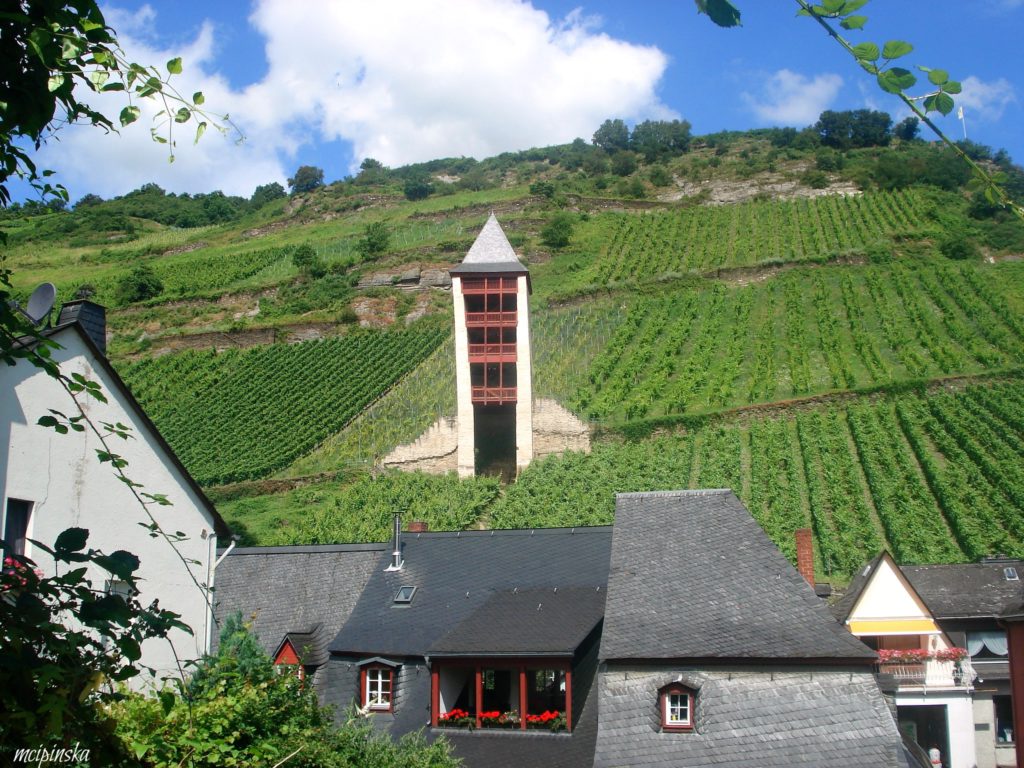 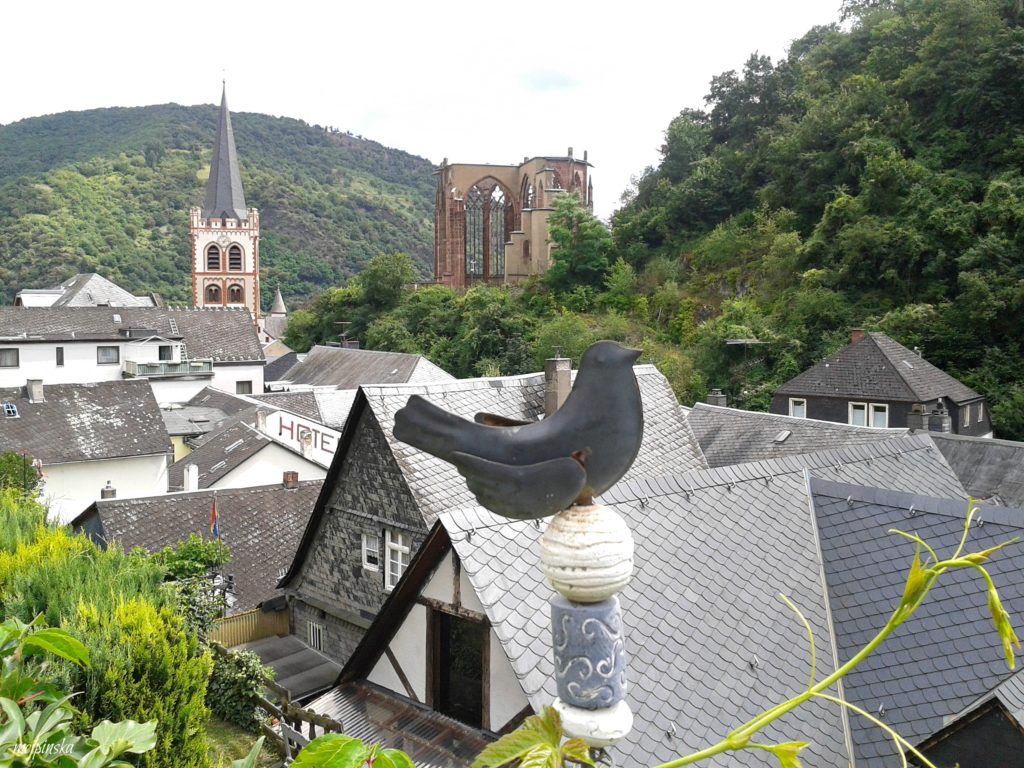 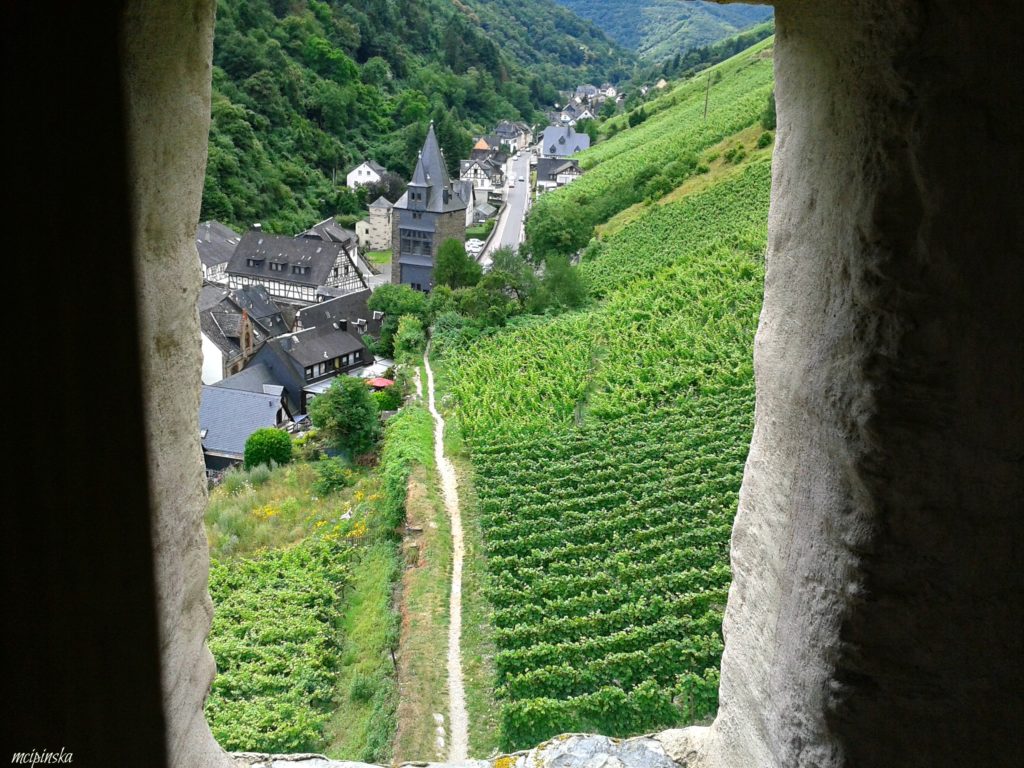 Bacharach lies on the RheinBurgenWeg trail which goes along the left side of the Rhine. It is more than 200 km long and leads between castles, hills and vineyards. The trail in the direction towards Oberwesel is 13,3 km long and it takes about 4:30 h to reach that place. The way to opposite direction goes to Trechtingshausen and is 21,6 km long, which means about 7 h hiking. 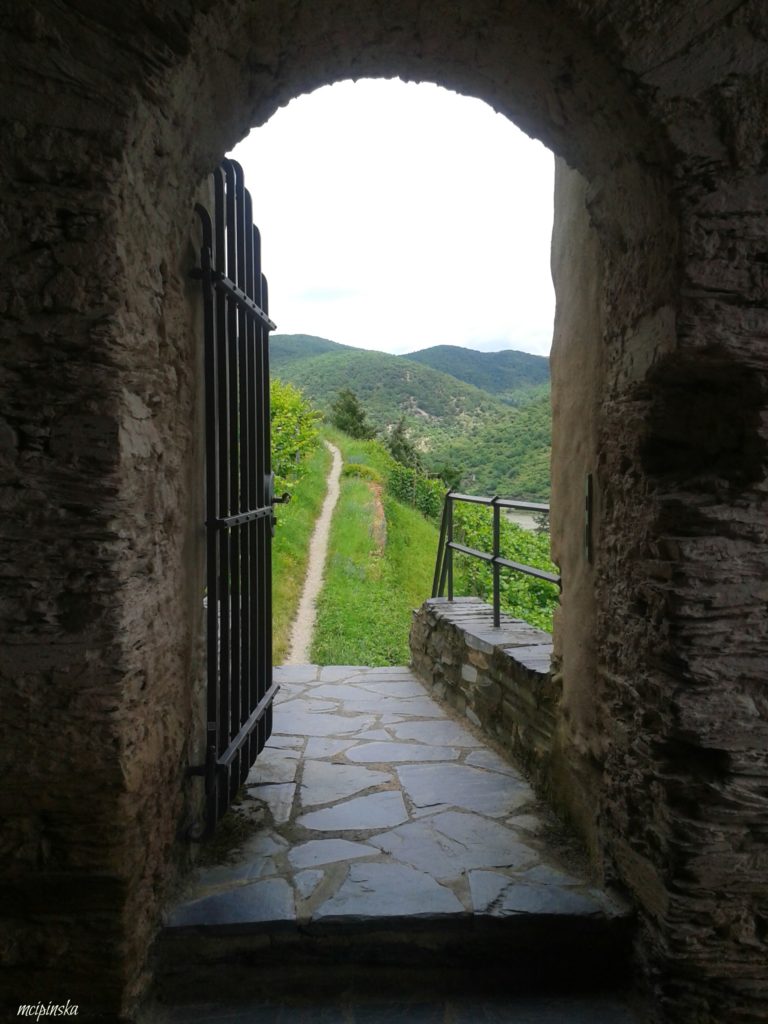 There are also plenty of opportunities for cyclists. Bacharach  is one of the stops on the Rhein-Radweg, which starts in Neuburg am Rhein and finishes in Remagen. It is 330 km long bike trail, which lies directly along the Rhine river.  The distance to Bingen is just 15 km and offers a great view of the Mäuseturm. To get to Oberwesel by bike is just 7 km. It is also possible to rent bikes or take part in the organised bike tour with wine tasting. 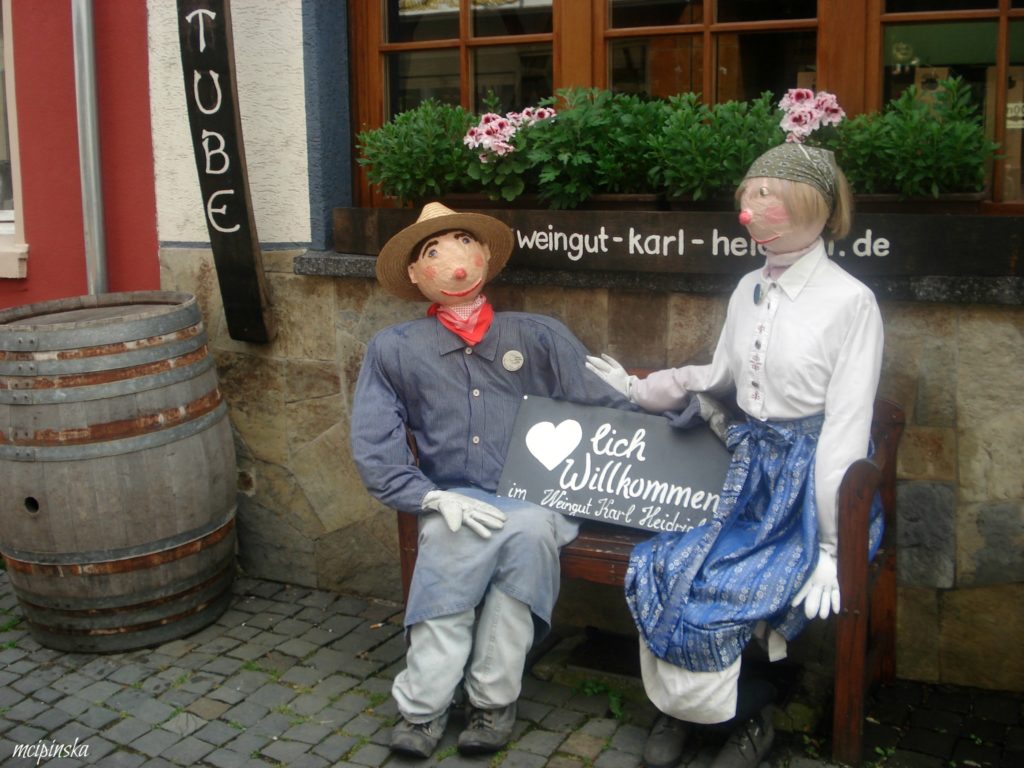 The old legend says that when Frederick Barbarossa was about to come to Bacharach, the devil was planning on cutting his reddish beard. To prevent that the Giant helped to kidnap and kill all the barbers from this village. This way when Barbarossa arrived, the devil was not able to make his plan work, because there were no barbers in Bacharach anymore.

So during your visit to Bacharach, after nice walk and good wine, please check if there are any barbers there…

How to rich the city?

From Frankfurt am Main or Wiesbaden through Mainz with train to Koblenz.

Bacharach is on the Rhein-Radweg along the Rhine river.

Road 9 between Koblenz and Bingen

From Loreley or Ruedesheim.

There are plenty of boat trips offered from multiple cities along the river. Some of them stop in Bacharach.

Get ready for a lot of butterfly photos this month